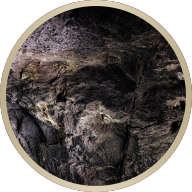 During the wine-tasting cellar tour, we visit many sections of the HOLDVÖLGY cellar system, that’s oldest branches were built in the late Middle Ages. By joining nine previously separate cellar passages the 3-level cellar system was established in 1955. In its present form the cellar has the total length of 1830 meters, consisting of 109 branches.

Interesting fact that the first true golden age of viticulture in Tokaj-Hegyalja was in the 18th century, when owning a vinyard was considered a status symbol. At the turn of the 20th century in Mád, the “Úribor” (Noble’s wine) Tokajhegyalja Wine Co-operative was established by 19 founders of which 12 were aristocrats (including a prince, six counts and five barons). What we consider now as HOLDVÖLGY cellar system was once owned by this cooperative.

After the land reform in 1945, parts of the unique Mád cellar system were transferred to the newly formed state winemaking companies. During our cellar walk a smaller square-shaped room can be visited where official meetings of various Hungarian and Soviet delegations took place during the 1950s. The two nations’ friendship was said to be strengthened by several bottles of tokaji aszú wine consumed during theese official meetings.